Rosacea is a common and chronic disorder exclusively of facial skin. It is more common in patients aged 35-60 that have fair skin. Rosacea is probably best described as an inflammatory skin condition, although in addition to the immune system, nerves endings, blood vessels, genetics and UV radiation all play a role. There are many types of rosacea, just as there are many types of apples, oranges and flowers! Sometimes it takes a skilled eye to make a diagnosis of rosacea, especially if the symptoms and signs do not fit perfectly textbook descriptions.  At Melbourne Skin & Dermatology, we have a special interest in providing rosacea treatments in Melbourne.

We are still learning a lot about rosacea. Ongoing research allows us to better understand the condition which will allow the development of more effective management options.

Most mild cases of rosacea are managed by patients themselves or with the help of their general practitioner. The implementation of effective treatments of more severe or stubborn cases of rosacea is in the realm and specialty of dermatologists.

As an all-round specialist dermatology clinic, we work with our patients to achieve their goals and always maintain professional standards.

Rosacea is typically classified into 4 main subtypes; 1. Erythematotelangiectatic 2. Papulopustular 3. Phymatous 4. Ocular. Patients with most subtypes of rosacea tend to complain of ‘sensitive skin’. There may be crossover of symptoms and signs between the four subtypes of rosacea.

In subtype 1 – erythematotelangiectatic rosacea, patients often complain of ‘broken blood vessels’ which refers to the dilated blood vessels that can be seen on the face, usually the cheeks, nose and chin. Flushing can be an additional feature which can cause much anxiety to patients. In addition to this, there is a fixed red colour to the skin which we refer to as persistent erythema. 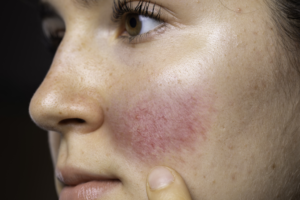 In patients with papulopustular rosacea – subtype 2, pimple-like lesions occur mostly on the nose and cheeks. These lesions can be pus-filled or simply small red bumps. This form of rosacea can often be mistaken for acne. The key difference however, is the lack of comedones (whiteheads and blackheads) as well as a lack of lesions on non-facial skin. Patients with rosacea are often also in an older age group compared to acne. Steroid-induced rosacea and peri-oral dermatitis are conditions that can also mimic this type of rosacea leading to misdiagnosis.

Phymatous rosacea – subtype 3, refers to the thickened and porous skin that is sometimes seen. This most commonly affects men and is most commonly seen on the nose, called rhinophyma. Other areas which can develop similar changes include the chin, forehead and rarely ears and eyelids.

Occular rosacea – subtype 4, is often overlooked and disregarded as a skin condition. Patients often complain of a gritty and dry sensation in their eyes and eyelids, some describing the feeling like having sand stuck in their eyes. The eyelids can appear normal in mild cases, but in more severe cases, crusting, redness and blurred vision can occur. Other changes to the eyes can occur, warranting specialist treatment by an ophthalmologist (eye specialist).

The type of rosacea you have will determine your specific rosacea treatment plan.

Whilst alcohol can aggravate rosacea in some people, rosacea is not caused by excessive alcohol consumption as people once believed.

There seems to be a very complex and abnormal interplay between the immune system, nerve endings and blood vessels of the face in patients with rosacea. There is no doubt that genetics also plays a role as rosacea is often seen to run in families. Ultraviolet radiation from the sun is a key trigger for rosacea, as are some foods including spicy foods, caffeine and hot drinks. There also seems to be role of a mite called demodex which we all have living on our skin rejuvenation. For some reason, patients with rosacea tend to have higher numbers of this common mite.

The specific treatment of rosacea will depend on many factors. These factors include the subtype of rosacea being considered as well as patient preferences and tolerances. Firstly, there is no point trying to actively treat rosacea if it continues to be fuelled by known triggers. Avoiding sun-exposure and the foods known to trigger rosacea are essential.

As a rule, when it comes to caring for skin affected by rosacea, the KISS principle needs to be adopted. That is, keeping skin care regimes simple and being gentle with the day-to-day care of the skin. Using soap-free cleansers that are pH balanced is essential. Hot water should be avoided and only lukewarm water should be used when washing the face. A soft towel should be used to dry the face and only done by dabbing rather than vigorously rubbing. Toners, abrasive exfoliators, peels and such treatments should be avoided. Mineral based powder makeup should be used instead of thick concealers. Avoid creams which have botanical ingredients, as while they sound very ‘natural’ and harmless, these ingredients can often irritate the skin. Finding a broad-spectrum sunscreen which is well tolerated is also important. This needs to be applied regularly during the day if out and about.

The dilated blood vessels and fixed redness may be improved by specific vascular laser treatments. These treatments need to be performed cautiously by experienced practitioners and tailored to suit the individual patient. If performed incorrectly, lasers can flare rosacea and even cause burning, blistering and scarring of the face.

Flushing can be a more difficult problem to treat, but cream and tablet treatments may suit some individuals, whilst laser treatments may also provide some benefit for this as well. Antibiotic tablets and several types of medicated creams can be very useful for the pimples of rosacea. Patients with phymatous rosacea who present in the initial stages can benefit from oral retinoid capsules restricted to the use by dermatologists. Laser surgery is required to correct rhinophyma in the late stages.

If you would like to seek help for your rosacea, feel free to contact us or complete our complimentary assessment.